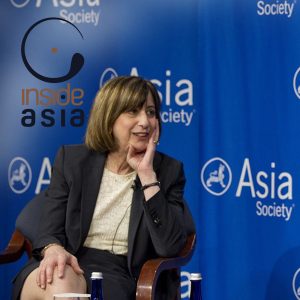 We’ve been talking about the impending US/China trade war now it appears our worse fears are coming true. President Trump has followed through with $250 billion in tariffs impacting over 6,000 China-made products—with, apparently, more to come. China has retaliated with its own set of tariffs. No one can say where this is headed, though we can be certain that it’s consumers—and workers—on both sides of the dispute who are going to take the brunt of it. To get perspective on what an all-out trade war might look like, we reached out to Wendy Cutler. She served under the Obama administration as Deputy US trade representative and now holds the title of Vice President and Managing Director of the Asia Society Policy Institute. Watching this trade debacle unfold has been particularly painful for Wendy, who spent years developing and negotiating the Trans Pacific Trade Agreement, or TPP. Her perspective on the current situation is essential listening. Trade accords are complex matters. There’s politics to consider, protectionism, currency adjustments and adherence to literally dozens of ongoing bilateral and multilateral trade agreements. The Trump administration would have us think differently. There are good deals and bad deals, he tells us, a bad deal being any one that doesn’t favor the US. This is a fundamental misunderstanding of what makes trade work in the first place. Compromise is the name of the game, and for experienced negotiators like Wendy Cutler, it’s a matter of listening and discerning the minutia of what’s doable for all of the parties involved. China has its own unique set of trade issue, and in this episode we get into some important detail. Pressuring China to make changes is one thing, but refusing to negotiate is another. There are many reasons why applying tariffs then walking away is a bad idea, but here’s the biggest one: China, and the rest of the world for that matter, have other options. And what happens then—when a new TPP is negotiated without the US at the table? As always, thanks for listening.