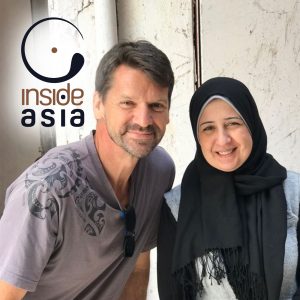 This is Part II of my conversation with documentary filmmaker Thomas Morgan. Once again, we’re in the Screening Room with a rooftop view of Singapore’s restaurant and club district. If you haven’t listened to the first of this two-part episode with Thomas, don’t miss it. In our initial discussion we talk about Morgan’s early days and the events that conspired in mid-life to lead him to documentary film-making. The essential thing for Morgan is seeing his subjects—and filming them—in a way that results in change. That’s not just film-making, that’s “film-anthropy. A sublime blend of visual art and action—oriented philanthropy. Thomas Morgan is more than a film-maker. He’s an astute observer of the human condition with a visionary drive to tell the stories of others and make the world a better place. In this second episode, our focus is on the film industry writ large and on Soufra, his latest project. The title means “feast” in Arabic and it’s been selected for screening later this year at the prestigious Toronto Film Festival. In Singapore, we get a sneak peek at none other than the Screening Room. At a time when the world is increasingly set on defining the Muslim world based on its proximity to terrorism, Soufra offers up a very different view. It chronicles the powerful story of Mariam Shaar, a Refugee and Social Entrepreneur in Beirut, who launches a successful catering company with a group of diverse and equally driven women. Through the lens of Morgan’s camera, the lives of others become a kind of distant country, which we as the audience can briefly inhabit. In this age of instant downloadable visibility, we’re too often presented with a window to the world that feels hazy and ambiguous. Morgan’s work has the opposite effect. It brings life into sharp focus. He unpacks human stories of suffering and triumph, and even improbable friendship.