Thomas Morgan Part I: An Accidental Filmmaker and the Origins of Film-Anthropy 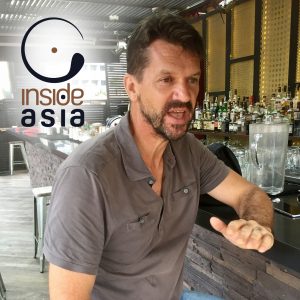 Thomas Morgan Part I: An Accidental Filmmaker and the Origins of Film-Anthropy

This week finds me with documentary filmmaker Thomas Morgan in the Screening Room in Singapore’s club district. It’s a four level shop house with a rooftop bar with a private “screening room” on the third floor. It seemed a fitting location for my conversation with Thomas. If you haven’t Morgan’s work, you need to. He’s an up-and-coming documentary film-maker who through happenstance found himself moving from Charlotte, North Carolina to Singapore. From here, he struck out to identify projects with compelling protagonists and story-lines. And hit on them, he did. His films are immersive and extraordinary. His protagonists are the unwanted, the disenfranchised, the poor, and the outcast. His mission is to levitate his characters from the mean streets of their worlds in order to transport them into our living rooms and our lives. What’s most revolutionary is his approach. When Thomas makes a film about a subject, whether it’s homelessness in America or a children’s shelter in Nepal, he asks how a situation can be improved and changed. The essential thing for Morgan is seeing it—and filming it—in a way that results in change. That’s not just film-making, that’s “film-anthropy”. A sublime blend of visual art and action—oriented philanthropy. This is the first of two episodes with Thomas, in which he tells me about his early days and the twists and turns that led him to the work he’s doing today. Thomas started off selling copiers, moved on to investment banking, and then left that very lucrative career after being moved to make a film about homelessness in America. It’s a compelling, hilarious and remarkable story. Visit Thomas’s website, HERE, to learn more about his extraordinary work.