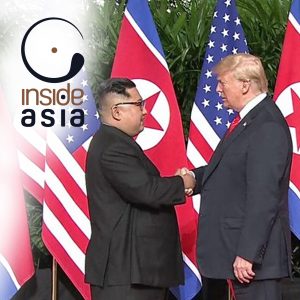 In this episode we’re looking back at the Kim Jong-un and Donald Trump meet-up in Singapore. It now feels like the distant past. And that’s the point. This news cycle is more like a news cyclone. There was much ado about the meeting of the two corpulent men, but now that the dust has settled, what do we have to show for it? To get perspective we reached out to two key members of the Inside Asia Network, both of whom have a deep knowledge of the region and who also happen to have been on the ground in Singapore. We first speak with Steve Okun. He’s Senior Advisor at McClarty Associates and for the last twelve years has served as Governor of the Singapore Chamber of Commerce. He’s a trusted source who happened also to have a ringside seat at the festivities. Was this one of those surrealistic moments that defied logic and protocol, or was it the first small step toward the giant leap of opening North Korea? And what was it like in Singapore when the circus arrived? Next we talk with Frank Lavin, Founder and Chairman of Export Now and a former US Ambassador to Singapore. Frank is based in Singapore, and, as you might expect, found himself pulled in by CNN and others to comment. I put the same question to him that I put to Steve Okun: Is the Trump/Kim meeting to be seen as a window of opportunity, or further evidence that we are living in the Matrix where perception and reality have parted ways? And, again, what was it like on the ground?