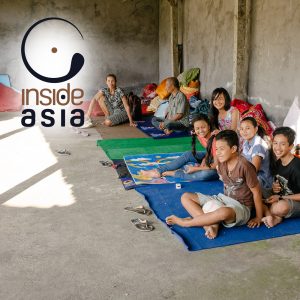 We’re on the cusp of a possible environmental crises in Bali. Mount Agung is about to erupt. We don’t know when, but Bali remains on high alert. It’s now more than two weeks since the volcanic threat level was raised to its maximum. Earth tremors are a daily event and as many as 150,000 people – mostly farmers and herders – have been evacuated a safe distance from the volcano’s blast zone. We’re rushing this episode out with things still in flux. Bali is my home. It’s imperative that people understand how things look on the ground. Rucina Ballinger. Photo by Suki Zoe. My guest is Rucina Ballinger. A resident of Bali for more than thirty years, Rucina first came to Bali when she was in her twenties. She fell for the place and a guy who happened to be part of the Balinese royal family. They got married and since then she’s dedicated herself to the people of Bali. She’s also one of the most thoughtful and insightful commentators on Balinese culture and tradition. I wanted to ask her what people are doing to prepare and to give us some perspective on how this impending eruption is understood from within Balinese culture. For nearly three weeks, authorities have been calling the eruption of Mount Agung “imminent.” Seismic activity continues unabated and though it’s taking longer than expected the danger is just as real today as it was weeks ago when the alarm was first sounded. In the meantime, people are preparing for the worst, gathering supplies, stockpiling bottled water, and running blankets and tents to the tens of thousands environmental refugees that are camped out on the outskirts of the so-called “red zone.” While the government has planning teams and military on the ground to help orchestrate the evacuation, NGOs are playing their part as well; rallying volunteers and filling the gaps by focusing mostly on supply-lines, providing water purification systems, and safety masks to protect against the threat of toxic ash. To learn more about the real-time situation in Bali and what you can do to help visit the website of Kopernik at www.kopernik.info. Click on the “pitch in” tab and thanks, as always, for listening.