Olivier Legrand: The Other Social Network 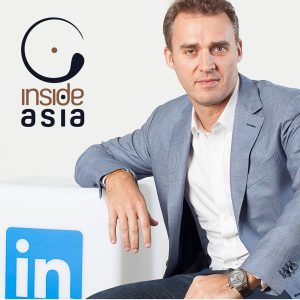 Olivier Legrand: The Other Social Network

Here’s the opposite of a newsflash: we’re in the midst of a global reevaluation of social media and its power. Facebook has been having a hard time recently, and before that it was Twitter. Amidst all the backlash, it’s notable that LinkedIn—the de facto social media platform for professionals —seems to have somehow risen above the fray. To better understand Linked-in’s business model, I sat down with Olivier Legrand, LinkedIn’s Managing Director and Vice President for Asia Pacific and China. The company got its start in the U.S. but soon grew worldwide to become the largest single network of professionals, job-seekers and key influencers. Full disclosure—for the last decade or so, I’ve worked as a headhunter in the executive search industry. It’s a job that connects people and companies in the same way as LinkedIn. It’s a social media platform that, at various times in the past, I have had a complicated relationship. This podcast often tells stories of digital disruption, and here—at least potentially—is another one. What can LinkedIn tell us about the skills gap? What’s the role LinkedIn in a gig economy? What is powerful about this episode is the takeaway that LinkedIn allows for connections between people, and that the company prioritizes the relationships and trust it has with their users. I hope this remains the case. Not too long ago, another social media executive said something quite similar. Now he’s testifying before the US Congress, explaining and even re-defining trust as it exists or should exist between companies and customers. How will this bode for the world of social media? Time will tell. And, again, thanks for listening.