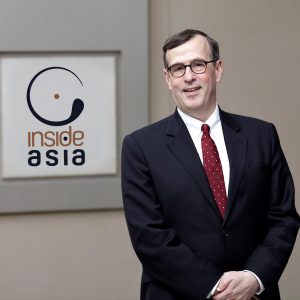 On this episode, my guest is Frank Lavin. Bespectacled, buttoned-down, he reminds one a little of Clark Kent. And like Clark Kent there’s a lot of sides to Frank. He’s done a lot of things. A former Reagan aide, Frank has been the US Ambassador to Singapore and is a former Director of the Office of Political Affairs in the White House. That’s the short list. He’s also held senior finance and management positions in Hong Kong and Singapore. He’s anyone’s definition of an Asia Insider. I wanted to talk to him about his newest venture, which turns a popular misconception about US China trade on its ear. Most of the time when people think about the economic opportunities offered by China, they think about importing goods. Lavin and Export Now do the opposite. Instead of looking for profits in exports from China, Lavin’s newest venture Export Now does the opposite and offers businesses a variety of solutions to import goods into China. It’s a fascinating discussion. We met up on the 52nd floor of Singapore’s Tower Club, which has the best views in the city, looking out over the harbor, and Marina Bay sands. Our interview concludes, as you might guess, with Lavin Trump Presidency and how changes in the American political landscape might impact what it means to do business in China. For more detail on Export Now and the possibilities it might offer you or your business, the best place to start is their website, which gives a complete picture of the different services they offer. For a deeper dive, there’s his book “Export Now.” A lot has changed since that came out in 2011, and you can find Lavin’s more recent take on China’s consumer surge over here at Forbes where you should also bookmark Lavin’s excellent and ongoing Forbes blog on e-commerce in China.