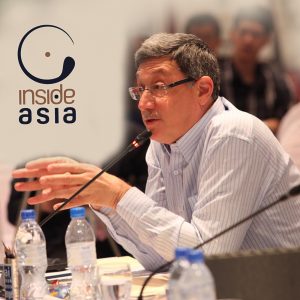 My guest is Eric Rosenkranz, former Vice Chairman of Focus Media China, now founder and CEO of Advisory firm, eThree. I’m speaking to him in the offices of Expara, one of Singapore’s earliest venture capital firms that specialize in incubating and training start-ups. In case you missed our last episode, it featured Eric’s unforgettable tale of a billion-dollar startup that began with the idea of placing video feeds in Chinese elevators. It was that success that led Eric to position himself as mentor to some of Southeast Asia’s most promising young entrepreneurs. He’s the guy folks turn to in hopes of taking their game to the next level. That’s our focus this time: executive mentoring. Most everyone will agree that supporting and developing leadership teams is one of the most crucial functions in ensuring a company’s success. In practice, however, the effort is widely neglected. As a corporate headhunter, I’m regularly astounded at the meager investment that most company’s make in their people. Formal training programs, top-team development strategies, and psychometric testing are all highly structured techniques for bettering people to boost performance. Start-ups or mid-size companies may not have such extravagant resources, but it doesn’t mean that talent development should be regarded as any less important. Classic “mentoring” is one of the oldest, most effective, and truest forms of instilling skills, building loyalty, and passing on knowledge. Even so, I’m continually struck by how effective mentoring has fallen off the radar for many companies. It’s all the more shocking, when you consider how much lip-service is paid to the idea. Whether it’s due to fewer resources or the more intimate nature of being an early-stage company, mentoring among start-ups tends to be more prevalent, and while it’s hard to quantify, there’s some indication that it’s enjoying a bit of a resurgence. Around the world—and Eric gives us a unique glimpse into the challenges specific to Asia—the concept and practice of mentoring via “incubation” or more informal means, appears to be enjoying a comeback. As Eric points out, the key to effective mentoring is to think less about one size fits all, and to think more about tailoring mentoring to the most immediate needs of young entrepreneurs on a trajectory to become savvy, fast-growth executives. Subscribe to the podcast here on iTunes and to our InsideAsia Newsletter here and never miss an episode.